They were Nkosi Sikelel' iAfrika and The Call of South Africa Die Stem van Suid-Afrika. Parry's tune was used as the melody for several hymns, most notably Jesus, Lover of my Soul written by the founder of Methodism, Charles Wesley. Nkosi sikelel' iAfrika Maluphakanyisw' uphondo lwayo, Yizwa imithandazo yethu, Nkosi sikelela, thina lusapho lwayo. In terms of Section 4 of the , 1996 Act 108 of 1996 and following a proclamation in the Government Gazette No. Full of thumping drums, pumped up synths and ripping acid bass lines, this track will surely grab your viewers attention. United Kingdom— Blue Sky Publications Ltd — Company Registration Number: 046836392. Special thanks to: Ermano Geuer for some of this information.

The anthem is in 2 parts, Nkosi Sikelel' iAfrika written in 1897 by Enoch Sontonga and Die Stem van Suid Afrika written by M. Langenhoven in 1918 and was set to music by the Reverend Marthinus Lourens de Villiers in 1921. Lord, bless our nation, Of South Africa. However, she was building on the work of many different people over a century of time. Sikelel' amadod' esizwe, Sikelela kwa nomlisela Ulitwal'ilizwe ngomonde, Uwusikelele. Reviewed November 2015 Would you like to use this article in your publication or on your website? The new English lyrics were adapted from the last four lines of the first stanza of 'Die Stem van Suid-Afrika', with the changes made to reflect hope in post-apartheid South African society. It was first sung publicly at the official hoisting of the national flag in Cape Town on 31 May 1928, but it was not until 2 May 1957 that Government made the announcement that Die Stem had been accepted as the official national anthem of South Africa. 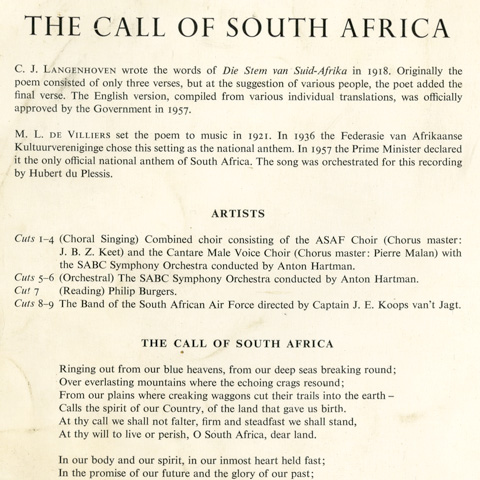 If you are the developer of this app and would like your information removed, please send a request to and your information will be removed. Xhosa and Zulu Morena boloka setjhaba sa heso, O fedise dintwa le matshwenyeho, O se boloke, O se boloke setjhaba sa heso, Setjhaba sa South Afrika - South Afrika. In 1993 the Multiparty Negotiating Forum overseeing the transition to democracy invited submissions for a brand new national anthem. Over 200 entries were received, but none impressed the judges. As part of the process in drawing up the new Constitution, the question was asked whether the flag should be retained or a new one designed. Johannesburg: Chris van Rensburg Publications. This was rectified when South Africa's dual national anthems were merged in abridged forms in early 1997 to form its current national anthem. 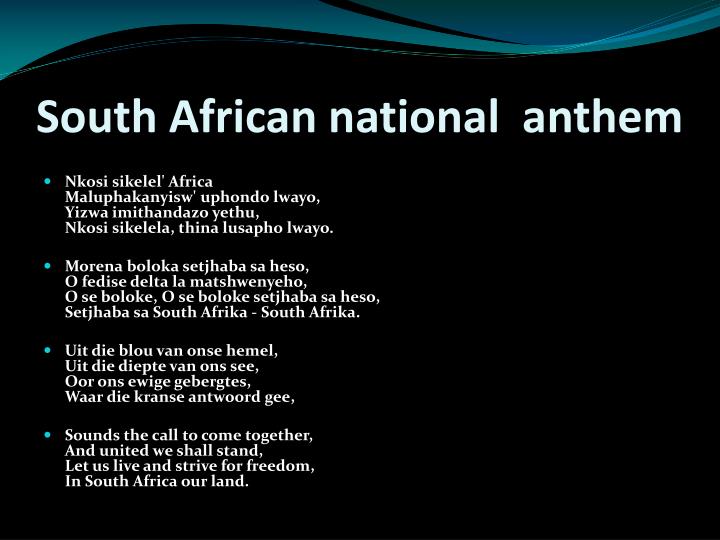 It was sung as an act of defiance during the Apartheid years. Bless the ministers of all the churches of this land; Endue them with Thy Spirit And bless them. Nkosi Sikelel' iAfrika - Nkosi was composed in 1897 by Enoch Sontonga, a Methodist mission school teacher. But, whoever said unusual was a bad thing? Trainee diamond polishers at the Harry Oppenheimer Diamond training school Photo: Chris Kirchhoff, MediaClubSouthAfrica. The committee responsible for this new composition included Anna Bender, Elize Botha, Richard Cock, Dolf Havemann Secretary , Chairman , , John Lenake, Fatima Meer, Khabi Mngoma, Wally Serote, Johan de Villiers, and Jeanne Zaidel-Rudolph. 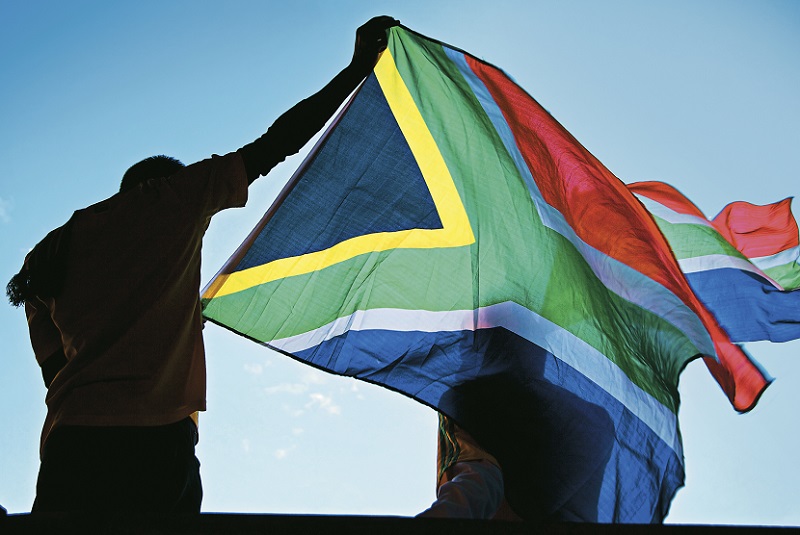 It became a popular church hymn that was later adopted as an anthem at political meetings. J Zaidel-Rudolph She came up with the order of the different elements of the anthem -- other members of the committee had also tried this, but hers was the idea that was accepted. Seven additional stanzas in isiXhoza were later added by the poet Samuel Mqhayi. Your support will help us to build and maintain partnerships with educational institutions in order to strengthen teaching, research and free access to our content. The South African Broadcasting Corporation played both God save the King and Die Stem to close their daily broadcasts and the public became familiar with it. South Africa 1983: Official Yearbook of the Republic of South Africa.